I’ve seen so many people get confused about Permatex and Loctite, that I finally decided to do a comprehensive post on these two.

Today we’ll be looking at both brands’ threadlockers and thread sealants. Common identical products here are:

Did you notice something in their numbers? Yep, they’re made like this for easier cross-reference.

A little trivia: Loctite bought Permatex in 1972, and around 2000 they sold them back. Currently, Permatex’s owner is Illinois Tool Works – the same company that owns Hobart and Miller welders, Tapcon fasteners and many more. 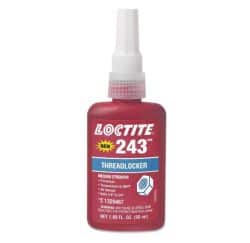 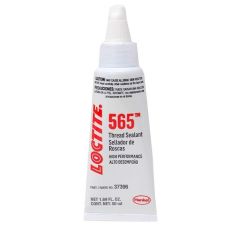 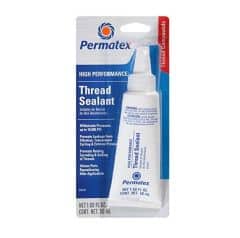 Absolutely the same as Loctite’s rival product. I guess get it if you prefer blue over red letters, as it’s as powerful and useful. 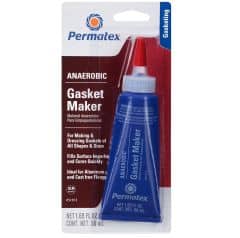 Fills bigger gaps which can be important in some cases. Otherwise has the same function and properties as Loctite 515/518.

The threadlocker products from both brands are almost the same. By ‘almost’ I mean that with general use, you won’t notice any significant difference.

There are, however, two small details.

First, Permatex has gel twist type threadlockers like the 24010.

It’s essentially the same product like the Permatex 24200 and Loctite 242. However, it introduces two improvements:

Second, Permatex is a bit slower in terms of fixture time. It will set in at around the 20-minute mark while Loctite 242 does the same after 15 minutes. Both fully cure after 24 hours.

Note: If you want a medium strength threadlocker and don’t care about gels, check out Loctite 243. It’s an improved version of both 242 and 24200 – primerless and oil resistant.

Keeps fasteners even tighter, and doesn’t require you to do a thorough cleaning on the threads beforehand.

But really, there isn’t much difference between the whole lineup of Permatex or Loctite threadlockers. They even share the same color scheme for the strength/hold of their threadlockers:

The blue threadlockers will be OK for 90% of your projects. If you need more info on Loctite’s products, I’ve compared their threadlockers already.

You can check the Permatex 24200 and read what people say about it. Still, as I said, I recommend Loctite 243 over any other medium strength product.

Two favorites of plumbers and mechanics – but not only. You’d need these two for a variety of pipe/fitting sealing jobs from waste treatment, to hydraulic lines, to brake fittings, air conditioners…

Both work with any NPT (National Pipe Thread) that’s up to 2″ – that’s 5cm for those using the metric system.

I mean, if you have any specific brand preference, go ahead and buy whichever you feel better about. Even the tubes have the same design.

The important thing is that you won’t have any leakages and will benefit from your benefits not rusting/corroding after you use either of them.

Absolutely the same as Loctite’s rival product. I guess get it if you prefer blue over red letters, as it’s as powerful and useful.

OK, so this time we have a little more variety that deserves mentioning. I had to dig in Henkel’s official site to find it

A small difference between this Loctite and the 5183 counterpart is the gap support:

Both of these are anaerobic gasket makers/flange sealants. You want to use them with metal parts and machinery. Aluminum, iron, steel – anytime you need a quick repair you can use either of these.

A more accessible substitute is Loctite 515. It works the same for most situations, with two caveats.

First, it’s subpar for aluminum flanges. Second, it sets faster so it might cure quicker than the other two with more active metals like brass.

Fills bigger gaps which can be important in some cases. Otherwise has the same function and properties as Loctite 515/518.

I won’t lie – much as I like using both brands’ products, all the classification going on can turn anyone’s head spinning. Why would I be writing this article otherwise, right?

If you want a somewhat complete Permatex vs Loctite cross reference table, one already exists. You can check it on Permatex’s official site.

Some people don’t make a difference between threadlockers and thread sealants. As I’ve compared Loctite and Permatex in both of these uses, let’s bring up some short definitions.

Threadlockers: These are adhesives which you apply on bolts/fasteners/screws so they stay tight. In addition, both brands’ threadlockers help against corrosion due to their protective formula.

Thread sealants: Here you seal two connectors. As I mentioned, these are generally pipes – from plumbing, to air conditioning or even projects dealing with anything automotive.

With gasket makers, I recommend you to refer to Permatex’s guide on what mistakes to not make when using them.

Curious about standard glue or epoxies? I’ve written a Loctite vs Gorilla Glue comparison – check it out 🙂