Strap in, guys. We’re going on an LED journey where I’ll illuminate the dark and solve the good ol’ debate: JW Speaker vs Truck Lite headlights.

Poetic intros aside, there really is a lot to say about both. This post is going to be thorough, so stock up on some patience. After all, these two are the highest quality LED lights you can pamper your Jeep (or other vehicles) with. They deserve full analysis.

At first, I’ll review the JW Speaker 8700 Evolution J2 and Truck Lite’s classic 27270C LEDs. After that I’ll talk a bit about heated LEDs, their 5×7 headlights and other things of note.

The “J” signifies it’s a Jeep Wrangler specific model. It has a half-halo on the low beam pattern, anti-flicker built into it and comes with an H13 plug so it’s a Jeep JK direct fit.

The Evolution 2 – perfect for Harley, Yamaha and non-JK vehicles, comes with H4 adapters. It also has a chrome-styled version unlike J2.

In terms of light output and other specs, they are absolutely the same!

Both Truck Lite and JW Speaker LEDs are true plug ‘n play. You take out the grill, unbolt your stock headlights and replace them with your new lumen beasts.

I’ll shed some light with a quick comparison table for the most impatient of you. I do encourage you to continue reading after this basic analysis, however. [go_pricing id=”jwvstruck”]

By the way: things can be a little different if you’ve got a TJ and want to go for the 8700 Evo J2 made for Wrangler. With the classic TJ you’ll need to fetch adapters like these H4 to H13 adapters.

Feel free to navigate to any part that interests you from this table of contents. 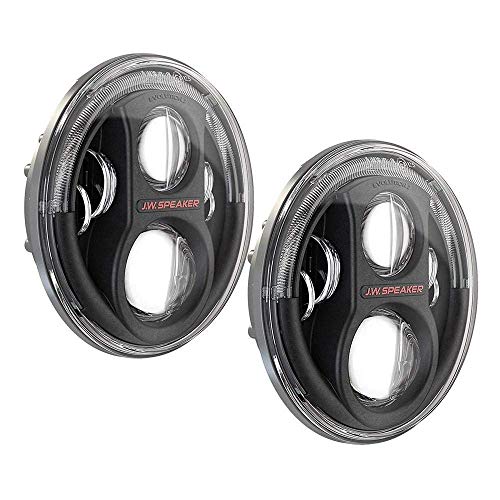 Better illumination, an extra beam pattern and no hotspots. A piece of LED innovation at your disposal. 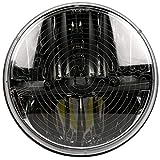 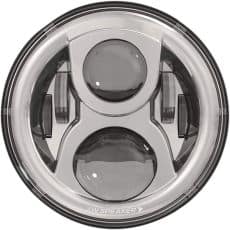 For fans of chrome looks and the OEM style. Design you can’t get with other current JW Speaker LEDs. 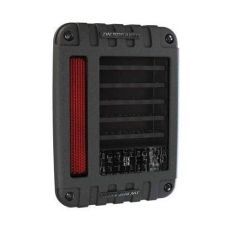 Let’s be honest, that’s the thing you care about the most.

Will these two give you better illumination over your OEMs?

Obviously. Why would they cost a small fortune otherwise?

The difference is like night and day. But there is one very intricate, crucial detail about the 8700 Evolution J2. That’s the Dual Burn tech they were designed with.

Now, with virtually all LED lights – including Truck Lite, you have two beam patterns. You either have high beam, or low beam illumination.

With previous-gen JW Speaker vs Truck Lite headlights, tests would find out that:

Here’s a video that shows what I mean:

However! The guys over at JW thought that it makes sense to actually combine low + high beam for a third pattern.

And that’s the real game-changer as you get low beam optics while you drive with your highs on.

A few other points of interest:

All in all, with the new Evolution series improvements, JW Speaker is simply better – if you can afford it. But I’ll talk about pricing matters a bit later. 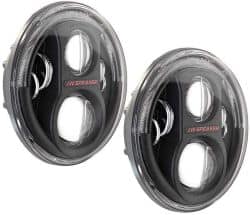 Better illumination, an extra beam pattern and no hotspots. A piece of LED innovation at your disposal.

I guess the big difference is that JW Speaker are more active in terms of R&D and innovation improvements. LED tech is progressing, and they’re doing their best to keep in touch with the latest developments.

Obviously, that’s not always well-received. Some Jeep owners preferred the J1 headlights in terms of design – and the lack of those red letters on the LED itself.

However, in terms of illumination power, I don’t really think Truck Lite can compete with the newer JW products.

Now, we can’t ignore this little detail. If you’re living in areas where the snow drops hard once winter arrives…

…Well, is there anybody who’d be OK with their awesome (and expensive) LEDs ruined by snow piling on them?

Obviously, you can’t clean the lenses while driving. And obviously, you wouldn’t like pulling over every 10 minutes to clean your LEDs.

Here’s something interesting, though:

Even non-heated LED headlights from both JW Speaker and Truck Lite will be able to melt some of the snow/ice due to their strong light. So with milder winter conditions, you would still be OK.

However, in areas with frequent snowstorms or lots of wet snow that won’t help you. In this case, I suggest you stick to heated lights.

If it’s about heated lights, Truck Lite are the real deal here with their 27275C model. 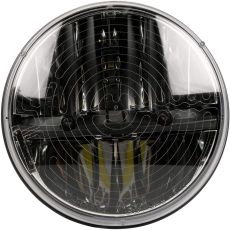 On pricing and style

Does it make sense?

Let’s set the illumination aside and talk about style. Because ultimately, one of the reasons a lot of people go for JW Speaker LEDs is that they just look cooler.

And that’s also why you see them being more expensive.

For people who want to customize their vehicles more, the various styles of the 8700 Evolution series allow for more comprehensive modded looks.

For example, the 8700 Evolution 2 lets you pick between:

For fans of chrome looks and the OEM style. Design you can’t get with other current JW Speaker LEDs.

With the JW Speaker Evolution J2 you get:

Obviously, some of you might not care much about such small details. For others, though, they help them create the Jeep they’ve always wanted to have. And the truth is, with JW Speaker you can do that better.

As I mentioned before, in terms of raw/effective lumens and general beam pattern, these two are the same. Here’s a video about the J2 that outlines the structural differences that make it fit Jeep – and specifically JK better.

5×7 LEDs from both companies might be rarer to come by compared to 7” replacement, but they’re still there.

In the case of our rectangular friends, with JW you have the 8900 Evolution 2 series. Truck Lite’s answer is the 27450C.

To summarize: The 8900 Evo 2 LED has twice the illumination power compared to Truck Lite’s counterpart.

With tail lights for Jeep models, only JW Speaker have dedicated LEDs – this is the Model 279.

As I pointed out in the comparison table, you get 3 years of warranty with Truck Lite. JW Speaker have a 5 year warranty – however it’s a limited warranty.

Let’s see what limitations we have here. Taken from their site:

OK, so what this effectively means is that you’re getting a better deal with Truck Lite’s heated lamps as they have a longer warranty. (+1 year more).

Regarding the 8700 Evolution series, the 3 year warranty is on their newest J3 LED headlights. So in the case of Evolution 2/Evolution J2, you still get the 5 year package. 🙂

In terms of legality, it’s easy: just make sure you get the DOT versions of both JW Speaker and Truck Lite LEDs. The models I discussed here all have a DOT version – that’s why you see so many people using and reviewing them, after all.

The DOT compliance can be seen on the lenses of the headlights. Make sure that you don’t get the ECE versions as these are not to be used in the US – they’re for the EU instead.

With these final details sorted out, it’s time for a quick conclusion:

JW Speaker are a superior replacement that gives you more vision and also looks cooler.

However, if you don’t feel like shelling out a lot of cash – you can always go for Truck Lite which will be several times better than any OEM or cheap Chinese knock-offs. (For God’s sake, please don’t fall for the flimsy knock-offs!)

Any additional questions you might have, or any personal experiences with either brand that you want to share…The comment section awaits you!